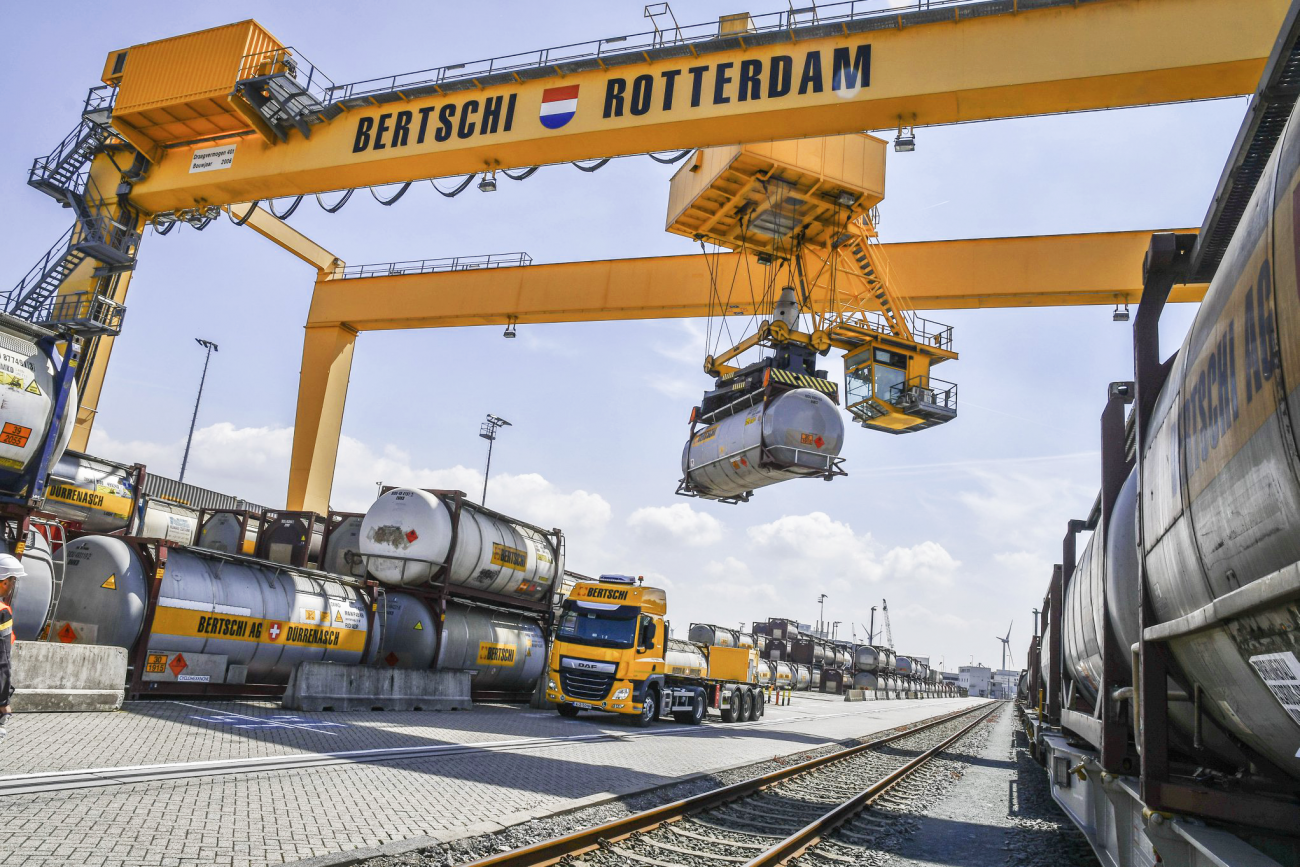 Thanks to expansion of its worldwide activities, the Bertschi Group grew again in the 2019 financial year. Due to the challenging market environment, the rate of growth for the global chemical logistics company slowed considerably. Sales rose to CHF 985 million, with the earnings position remaining just about stable. Efforts focused on the digital transformation and targeted expansion of services. The Swiss family-owned business plans to continue these efforts vigorously in 2020.

The second half of the year was shaped by economic headwinds

After a strong start, the world economy, and in particular the automotive industry, which is so important to the chemicals industry, lost momentum over the course of 2019. Bertschi was not immune to this trend and towards the end of the year was faced with weak transport demand, particularly in its European business units.

In the reporting year, Bertschi saw group revenues rise by 1.3% to CHF 985 million. The workforce grew by 3% to 3,100. Adjusted for negative currency effects, revenue gains of 3.6% in local currency terms were posted. In addition to the economic downswing, the strength of the Swiss Franc also had a negative impact. In spite of the difficult economic environment, timely and resolute cost management enabled Bertschi to maintain earnings just about consistent with the previous year’s figures.

Worldwide activities were the primary growth drivers in 2019, while Bertschi’s European business was increasingly tepid as the year progressed. The early-cyclical company was beset by significant economic headwinds toward the end of the year in Germany in particular.

Bertschi was successful in its implementation of complex supply chain solutions in 2019. In this area, the company offers comprehensive concepts encompassing order management, transport, storage, product handling and goods distribution. Such concepts are also increasingly used in global logistics chains. In-house hubs, such as the logistics centre in Singapore, play an important role in the storage, filling and distribution of liquid chemical products in South-East Asia.

Investments in digitalisation pay off

Bertschi made significant investment in its future in 2019. In addition to expansion of its container fleet by 7% to 36,800 units, substantial facility expansion in Duisburg and Schwarzheide (Germany) boosted local capacity for modal shift from road to rail (intermodal rail terminal) and for product storage concepts, respectively. Last year also saw the completion of the expansion of the headquarters in Dürrenäsch (Switzerland) and commencement of operations in the new facilities. With the new, modern office space, staff restaurant and outdoor relaxation areas, the company offers employees an outstanding working environment.

A focus of the company’s digital transformation efforts in 2019 was the roll-out of the Bertschi TruckTracer app. ‘Our drivers and all company partners receive their order data through the app and then record every step of the transport chain on it. This data flows into the Group’s transport planning system and from there on to customers through various interfaces. This real-time data is used to optimise internal transport planning, while customers benefit from visibility and more planning security in their delivery chains,’ says Michael Baechler (Group COO). By the end of the year, Bertschi had been able to implement this transparency tool in 95% of all European transports.

Digital and sustainable logistics solutions for the future

Looking ahead to 2020, Group CEO Jan Arnet is cautious: ‘Last year we saw a notable and steady cooling-off of the economy, and in Europe in particular important industry sectors have slid into recession. We expect this trend to continue in 2020, with corresponding effects on transport demand. I expect that our global orientation will allow us to offset regional sales declines to some extent. But we will continue to have a strong focus on cost developments in 2020 as well.’

In this challenging environment, the ongoing digitalisation strategy will be continued in full force. The objective of the digital transformation is to enable efficiency gains in business processes while simultaneously generating added value for customers. One component of this is the SmartTainer project, which will go into an initial implementation phase in 2020 following pilot testing last year. GPS and sensor technology in about 1,600 tank containers will enable parameters, such as the position of the container and the temperature of the loaded product, to be recorded and monitored in real time. This will enable the company to set new standards in terms of customer service, safety and efficiency, particularly in intermodal transport chains (rail, waterways).

In terms of sustainability, as the European market leader in environmentally sound road/rail intermodal chemical transport, Bertschi has played a pioneering role in this field for years. With this approach, CO2 emissions are reduced by more than 60% compared with road transport. In Europe, Bertschi conducts 90% of all overland transport by intermodal rail and will continue to expand this service in 2020. Sustainable concepts are also being implemented in other areas, such as the development of completely recyclable transport aids for loose plastics (GreenLiner) and the campaign to replace non-recyclable flexibags and barrels with tank containers in the transport of liquid chemical products.

The highlight of the traditional annual employees meeting on 18 January was the ceremony to honour long-serving staff. A new record was set with 142 employees receiving the thanks of Bertschi Group Executive Chairman Hans-Jörg Bertschi for 10, 20, 30 and even 40 years of service to the company. More than 60 of those honoured were celebrating their 20th anniversary of service with the company. ‘The millennium year that began in 2000 was evidently a very special class with exceptional company loyalty,’ said Hans-Jörg Bertschi. In addition to eight people celebrating 30 years of service with Bertschi, Bruno Steiner and Roman Fessler – both in leadership positions at the Birrfeld rail terminal – accepted congratulations on their 40th anniversary with the company. Their loyalty to Bertschi was met by all present with a rousing round of applause. 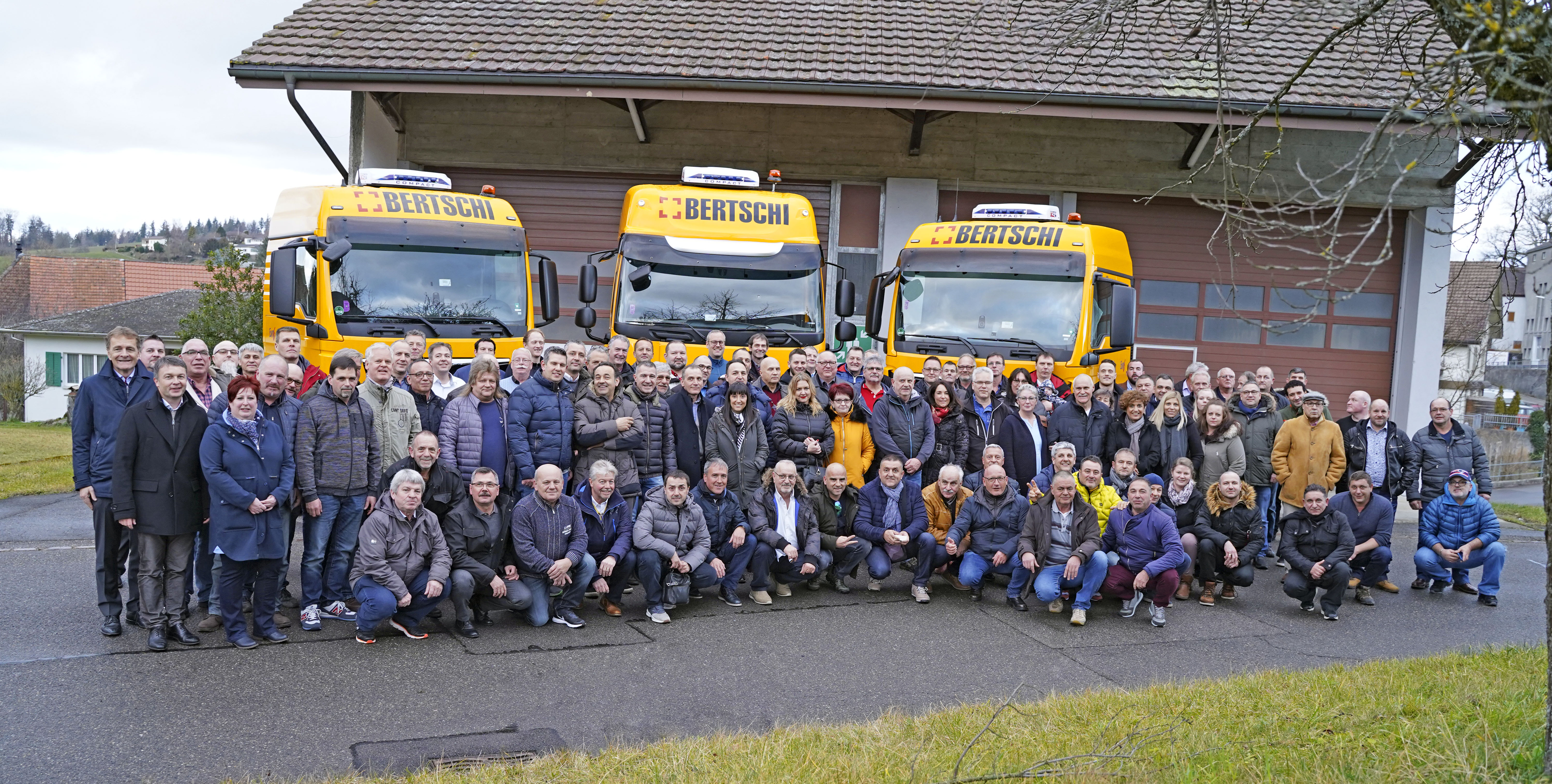