Multimodal Routing Between Europe and Asia 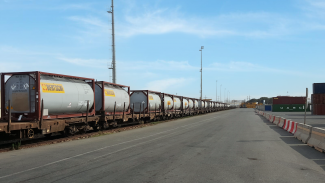 Over the past few months, it has become increasingly expensive and difficult to ship containers overseas by sea freight. Persistent capacity bottlenecks and high demand for goods are putting many supply chains to the test.

Producers and consumers alike are confronted with exorbitantly high sea freight rates and ships that are fully booked for months at a time. They are thus consistently exposed to the risk of having to shut down production lines due to a lack of material supplies. Air freight is often considered as an alternative, but is only suitable for smaller quantities and is also much more expensive.

To counteract this, together with our partner Hupac, we are providing our customers with a solution. In a combined rail and sea route, containers are transported via the Trans-Siberian Railway Network to Vladivostok, from where they are shipped on a shortened sea route to the Asian ports. In contrast to direct rail transport via the new Silk Road, which still requires several months of preparation in order to obtain the necessary permits for tank containers, the route via the eastern Russian port of Vladivostok is both a proven option and one that is available at short notice. Despite the long transit time of approximately 35 to 40 days, rapidly available capacity enables delivery to the recipient several weeks earlier than if the  containers were delivered by conventional sea transport. Since December, we have been able to transport a larger number of containers from Europe to Asia and vice versa in this way, thus expanding our knowledge and increasing the reliability of the route.

In the next, longer-term step, we are working on a viable solution for crossing the land border between Kazakhstan and China, since rail transport on the new Silk Road takes much less time than transport via Vladivostok – transit times of roughly 25 days are conceivable. Until this new route is established, however, the corridor via Vladivostok is suitable as a sensible, fast alternative to sea and air freight.