82 Bertschi containers on the Silk Road 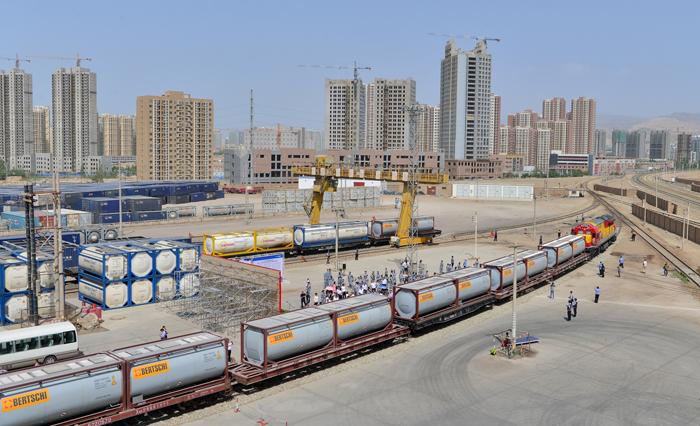 On May 26, a train loaded with 82 Bertschi ISO-tankcontainers began its long journey from Korla in Western China to Europe. The route, on which a distance of 8.000 kilometers and 7 countries are passed, is part of the project “One Belt, One Road” initiated by China.

The key parameters of this transport are extraordinary: A train with a total length of 800 meters and a weight of 3.000 tons carries 82 Bertschi ISO-tankcontainers to Europe. In total 18 days will be needed to move the high value chemical products from the production plants in China over the New Silk Road to their destinations in Germany and France. Considering the geographic location of Korla - the seaports of China are located 4.000 kilometers further East - the transport on rail is a reasonable and time-saving alternative.

The term “One Belt, One Road” stands for the development of the transport route between China and Europe and - driven by its location along the historic trade routes - it is also known as the “New Silk Road”. The large-scale project was initiated by China and will require investments of approximately 1.000 billion US dollars. This includes the construction of rail lines, roads, ports and power plants.

Bertschi already pioneered on the same route two years ago with the first block train loaded with chemical tank containers. The further development of the infrastructure along the New Silk Road will enhance the attractiveness of rail transport between China and Europe. Therefore the 82 Bertschi containers of the currently running train will most probably be followed by many more finding their way to Europe via the Silk Road.