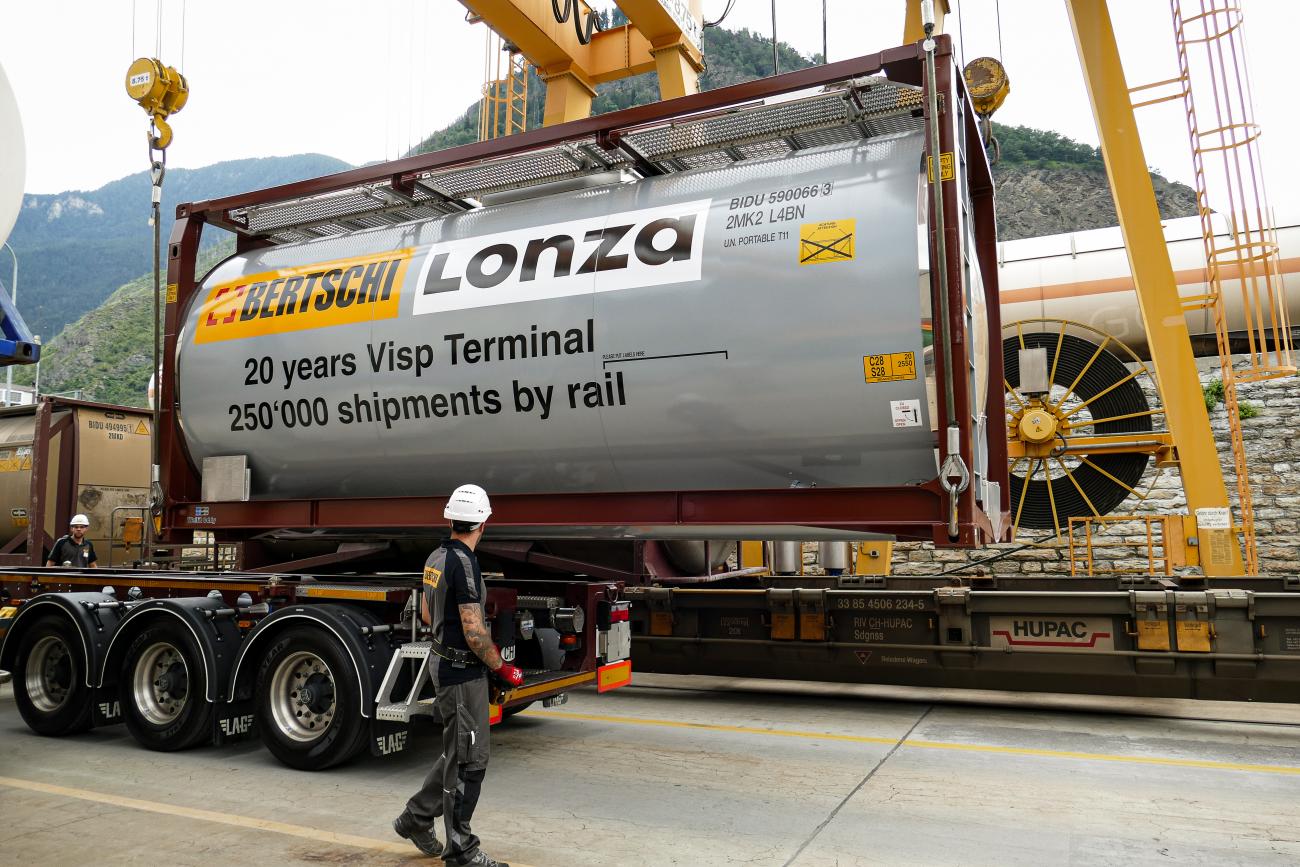 On 4 July, an anniversary celebration attended by about 40 invited guests was held at the Lonza site in Visp. The 20-year partnership between Lonza and Bertschi at the transshipment terminal in Visp has made a significant contribution to the shift from road transport in favour of environmentally friendly combined transport, thus helping to streamline the logistics of Lonza’s largest production site globally.

When talks were initially held back in summer 1998 about a possible terminal for combined road/rail transport at the site in Visp, Lonza and Bertschi were already long-term transport partners. Both parties saw the advantages of an integrated terminal at Lonza’s production site for goods transhipment to rail, which would tie Bertschi into the facility logistics chain with its container loading and unloading operations. The partners reached an agreement in a short time and a building lease contract was implemented. The opening of the terminal at the Lonza plant was celebrated in August 1999, about a year after the idea was first conceived.

Since operations began 20 years ago, the terminal’s transport volume has increased at a very healthy rate. In 2000, the terminal handled approximately 4,000 containers per year; now, it processes 16,000 consignments. At the same time, the number of employees has risen from two to eight, while the storage capacity was almost doubled in 2009 to 400 containers. The services portfolio has developed at a dynamic pace, too. In the beginning, the terminal was primarily the site of traditional operations, such as rail loading and storage; today, it is integrated much more strongly into Lonza’s logistics chain through Bertschi’s empty container management procedures.

The unique location in the heart of the Alps has always represented a logistical challenge for Lonza Visp. The terminal – and thus the link to the rail network – connects the Lonza plant in Visp to global freight flows. Raw materials are, among other places, procured in Asia, transported by container ship to Europe and finally delivered by rail. Conversely, the products produced in the plant are loaded into containers, leave the terminal by rail and are sold worldwide, including Asia and the US. The containers serve as a transport unit and storage vessel for interim storage on the plant premises. This eliminates investment in stationary warehousing and avoids multiple unloading and loading of products.

Thus, the successful partnership between Lonza and Bertschi was at the heart of the anniversary event and duly celebrated by both companies. The strong trust, good communication, effective integration at the Visp site and, last but not least, close coordination of the day-to-day operations stand testament to this partnership, which the employees help to maintain and develop each day.

After the anniversary speeches, the invited guests had the chance to watch the transfer of the official 250,000th container. This figure alone is evidence of the importance of the terminal for the Lonza plant and the role it will continue to play in the future.